The 10 most spectacular gardens and parks in Italy

share
Aug 132021The 10 most spectacular gardens and parks in Italy If you are a lover of greenery shaped by human ingenuity and Italian creativity, here you will find a list of park gardens to visit Tags: family, tourism, tours, travel, discovery, art, design, luxury, extraordinary, experience

If you are a lover of greenery shaped by human ingenuity and Italian creativity, here you will find a list of park gardens to visit. There is a close connection between Italy and art, but artistic culture is also contained in gardens. Campania, Liguria, Lombardy, Tuscany, Lazio and Umbria will invite you to discover the ten most spectacular gardens!
Have you ever thought about it? Well yes: that particular mix that distinguishes us so much in terms of history, nature, culture and beauty has made our beautiful Italy enjoy splendid miniature Eden.

Garden of Ninfa near Latina
Open only in certain periods, it is visited by about fifty thousand tourists a year. Considered by the New York Times as defining it as the most beautiful garden in the world, the fascinating garden of Ninfa was built on the ruins of the medieval city of Ninfa.
Lelia Caetani, the last descendant of the noble owner family, was the one who most of all took care of the rearrangement of the property, making it a true English garden, with numerous plants and crossed by the river Ninfa and numerous streams.
A WWF oasis has been established around the garden since 1976 to protect local flora and fauna, and in 2000 the whole area of Ninfa was declared a naturalistic monument. The New York Times called it the most beautiful garden in the world! 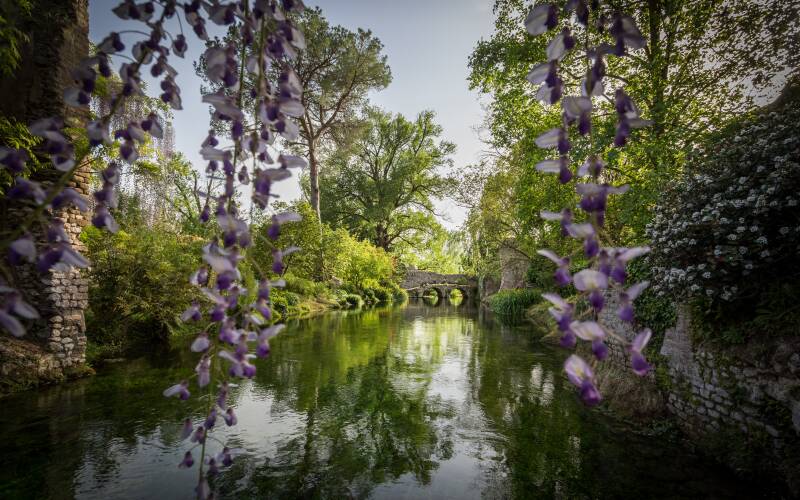 Garden of Ninfa near Latina

Gardens of the Venaria Reale, Turin
Part of the UNESCO World Heritage Site, La Venaria Reale complex is an environmental-architectural unicum with extraordinary charm, an immense, varied and evocative space, where the visitor can be involved in magical atmospheres collected in a context of cultural and leisure attractions. You can visit it on your own or with guided tours, or in a fun way with the “Freccia di Diana” train, the gondola or the horse carriage. During the warmer months, concerts, shows, and exhibitions alternate in contact with nature.

Royal Palace of Caserta Park
The Royal Park, an integral part of the project presented by the architect Luigi Vanvitelli to the sovereigns, is inspired by the gardens of the great eighteenth-century European residences, merging the Italian tradition of the Renaissance garden with the solutions introduced by André Le Nôtre in Versailles.
The works, with the delimitation of the area and the planting of the first plants, began in 1753.
It is a riot of greenery enriched by magnificent fountains and statues. Long avenues that connect an Italian garden with an English one, pools populated with fish and the triumphal Great Waterfall at the bottom of the park, further embellished by a mythological scene that seems to come alive under the eyes of the spectator! Diana, surrounded by some nymphs, is about to immerse herself in the waters while Actaeon, guilty of having dared to look at the Goddess in her nakedness, is already partially transformed into a deer; around him you find the agitated dogs that will tear him to pieces.

Tebaide park, Siena
Inside Villa di Cetinale there is a curious garden, built between 1698 and 1705. The latter takes its name from the desert area of Upper Egypt, inhabited in the Middle Ages by Christian hermits. Not surprisingly, along the path that winds through the woods, you will come across stone crosses, sculptures of saints, statues of praying friars, votive chapels and frescoes. Near Siena, you can spend your vacation in one of our extraordinary luxury villas. 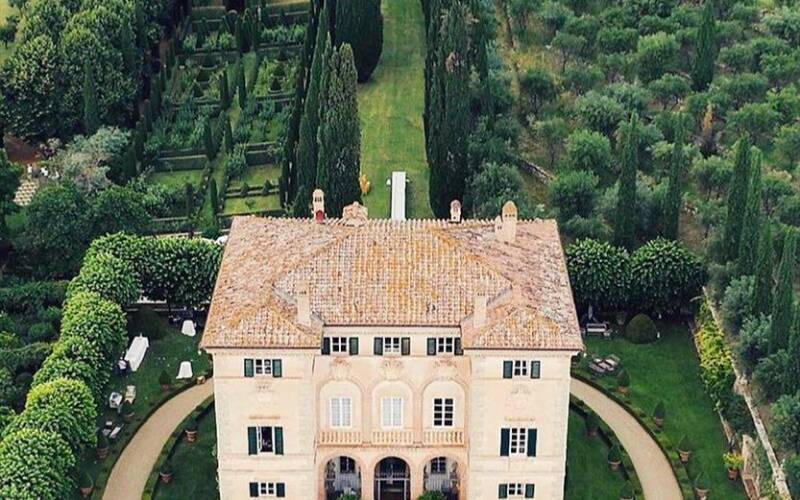 Gardens of “Villa Medicea di Castello”, Florence
On the Florentine hills, there is the seat of the Accademia della Crusca. It is surrounded by large and well-kept gardens, arranged on three terraces. The first consists of 16 square flower beds with a large basin fountain in the center. If you have rented a luxury villa in the surroundings of Florence, you cannot help but take a half-day to visit these wonderful gardens.

Miramare Castle Park, Trieste
Overlooking the Gulf of Trieste, the park of this enchanting castle on the sea, that seems to have come out of a fairy tale, contains a great variety of plants. Vast grassy spaces, winding paths and ponds create this splendid corner of greenery worthy of a Prince. Inside you will also find the "Butterfly Garden", a particular environment that allows 150 species of Lepidoptera to live in this enchanting Trieste garden.

La Scarzuola, Montegabbione, Umbria
Designed by architect Tomaso Buzzi, among trees, paths, strange statues, stairways, bizarre buildings, theaters and monuments you will live a strange experience in a surreal garden. A strange, magical, symbolic, esoteric place deliberately utopian, so conceived by its creator. Definitely suggestive. If you stay at a vacation rental villa in central southern Umbria, you will reach Scarzuola in no time.

Sigurtà Garden Park, Valeggio sul Mincio
In Veneto we find this pleasant mix of history, culture and nature, managed for 210 years by various owners. Later, in 1941, it was purchased by the Sigurtà family, still the current owner. Do not miss the spring blooms: hyacinths, daffodils and many, many tulips. This garden is the richest in Southern Europe and the most important in Italy for these flowers.
The terraced gardens of the villa are home to tens of thousands of plants, spread over an area of approximately 160,000 m² and are covered by 7 km of avenues. The garden of Villa Taranto is considered among the most beautiful in the world. It was created by the captain Neil Boyd Watson McEacharn, a British military strongly fond of botany and in love with Italy. The gardens are divided into various identifiable areas such as greenhouses, terraced gardens, flower beds and herbariums.

Villa Grock, Imperia
A magical and mysterious place, wanted by “the king of clowns” who came to rest here. Villa Grock, named after Charles Adrien Wettach (considered the greatest clown of all time) is an incredible and extravagant architectural and decorative mix of rococo, liberty, art-deco and oriental elements, all full of symbolism esoteric and freemasons.
The beauty, charm and mystery of this "enchanted place" of the Riviera di Ponente are ready to satisfy the visitors' curiosity after the careful restoration completed in 2006. The complete recovery of the garden, both from the point of view of the flora that for the consolidation of the structures, allows today to rediscover the atmosphere designed by Adrien Wettach himself, who had a great passion for plants. Overall, the park reflects the plant heritage typical of the historic gardens of the Riviera. The well-defined walkways invite to strolls, while all around the spindle columns, the bold arches, the absolutely unique decorations, the fountains and the pond with its oriental-inspired bridge, complete the suggestive and fairytale setting. It was Grock himself who led the project signed by the technician Armando Brignole, therefore it is not surprising that the originality of this villa is difficult to define. Rather than attempting to bring it back to a style, it is instead appropriate to consider it a sort of self-portrait, an expression of an extraordinary, playful and creative personality.

Villa Carlotta, Tremezzo
On Lake Como this beautiful villa is known not only for the works of art it contains but also for its splendid garden. The town of Tremezzo is located in one of the most beautiful points on the lake. The villa, imposing but sober, stands on the top of the beautiful and rich garden, whose development is favored in flowering by the particular climate. The property enjoys fantastic views of the Bellagio peninsula and the mountains surrounding the lake. Its garden is of great historical and architectural value. In it, there are citrus pergolas, hedges of camellias, 150 varieties of azaleas, rhododendrons, tropical plants, the valley of southern ferns, palms, cedars, the bamboo garden and secular conifers. The greenhouse, used in winter for citrus fruits, has been transformed into an interesting museum of ancient agricultural tools. Rent a luxury vacation villa by visiting this link and include Villa Carlotta among your visits. 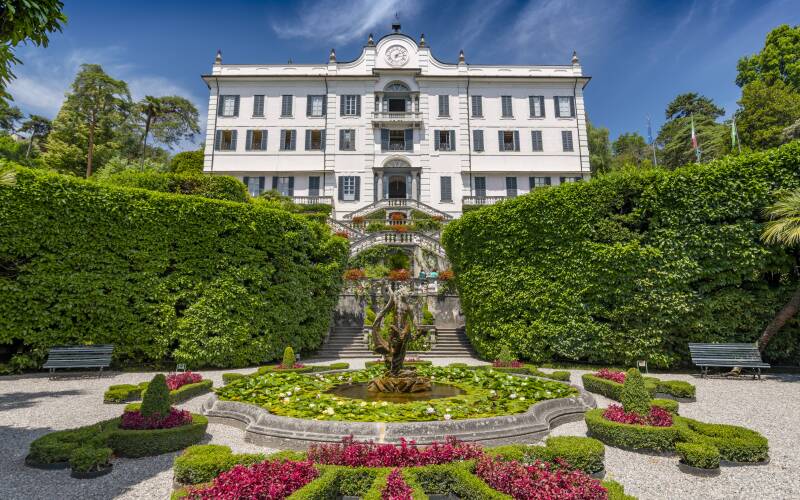