If 2019 was the year of Leonardo da Vinci to which exhibitions and cultural events were dedicated, 2020 is the year of Raffaello Sanzio. It is the year of the 500th anniversary of the death of this undisputed genius of the Renaissance art. Considered among the main representative of Mannerism, his art influenced many western artists, he determined the birth of the seventeenth-century classicism of Velázquez, Rubens, and Caravaggio. He inspired Delacroix and Ingres and influenced Manet and Dalì. 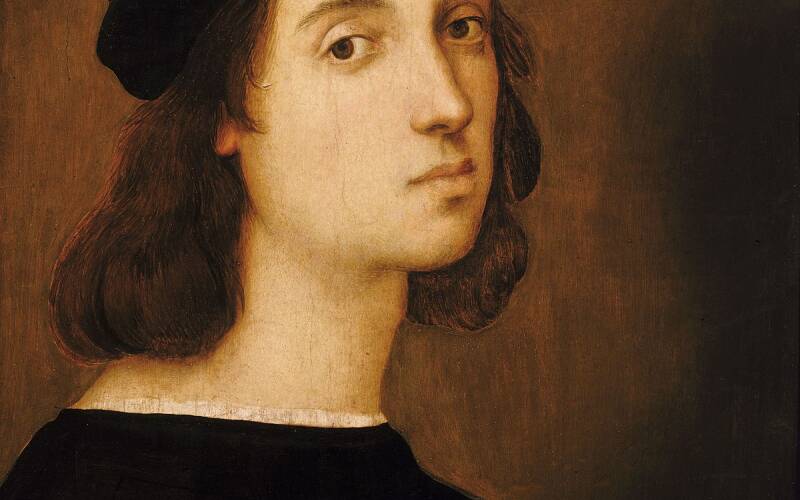 Born in Urbino in 1483, Raffaello had an intense and prolific life of artistic masterpieces and full of encounters with many illustrious figures among his clients and figures in the art world. Initially he carried out an apprenticeship in the workshop of the famous Perugino, working on the frescoes of the ‘Collegio del Cambio’ in Perugia. In 1499, at the age of sixteen, he moved to Città di Castello, where he received his first independent order; the banner of the Holy Trinity, also called Santissima Trinità, which is kept in the municipal art gallery of Città di Castello, where he left at least two other important works; the Gavari Crucifixion which nowadays can be visited at the National Gallery of London, and the Marriage of the Virgin, now preserved in the Gallery of Brera in Milan.

The fame of the young artist from Urbino was spreading throughout Umbria and around 1503 Raffaello moved away from Umbria and Urbino in order to make short trips to Florence, where he admired Leonardo’s art works for the first time.
During his stay in Florence, orders continued, arriving from Umbria and the Marches, including the frescoes with the Trinity and saints still preserved in the church of the monastery of San Severo, in Perugia. The stay in Florence is an opportunity for Raffaello to deepen the study of the models of ‘400, from Masaccio to Donatello and to learn the new artistic principles of Leonardo and Michelangelo. Raffaello is very fascinated by Leonardo’s ability to harmoniously compose the figures according to geometric patterns. While from Michelangelo, he puts in practice the plastic light and shades, the dynamism of the figures and the chromatic richness. Raffaello left a large number of pictorial works, internationally recognized among the greatest masterpieces in the history of art. 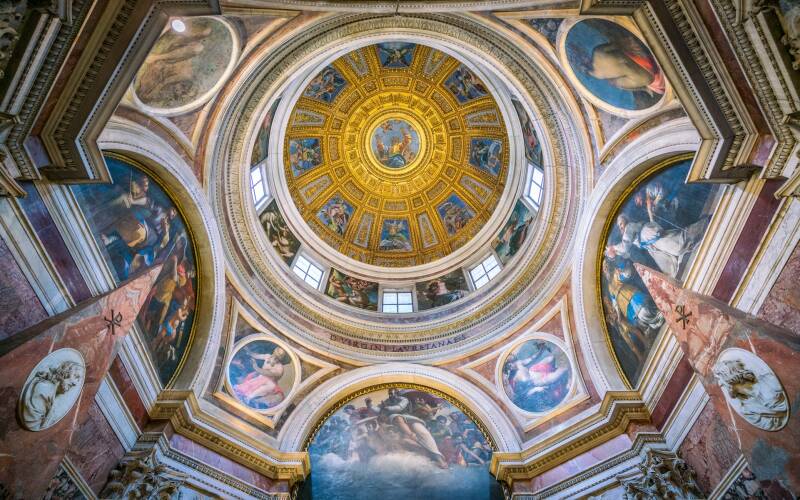 
Here several suggestions of his works, among the most beautiful that you can admire in Italy.

Preserved in the Gallery of Brera in Milan, you can admire the Marriage of the Virgin. Made in 1504, when Raffaello was just twenty-one years old, the Marriage of the Virgin altarpiece marks the transition from youth to artistic maturity. Fascinated by his beautiful ideal, Raffaello wanted to represent himself in this work, through a technique that shows the full autonomy of style compared to the master Perugino and a marked attention to the perspective space.

If you find yourself spending a holiday in a luxury vacation villa near Florence, at the Uffizi Gallery you can admire La Madonna del Cardellino (the Madonna of the Goldfinch), one of the first works of Raffaello, made in Florence in 1506. Leonardo’s influence is clearly visible in the pyramidal composition, in the use of light and shades and in the somatic features of the two children. At the Uffizi Gallery you can also admire the most famous self-portrait of the great master of the Italian Renaissance, painted in tempera around 1504-1506. 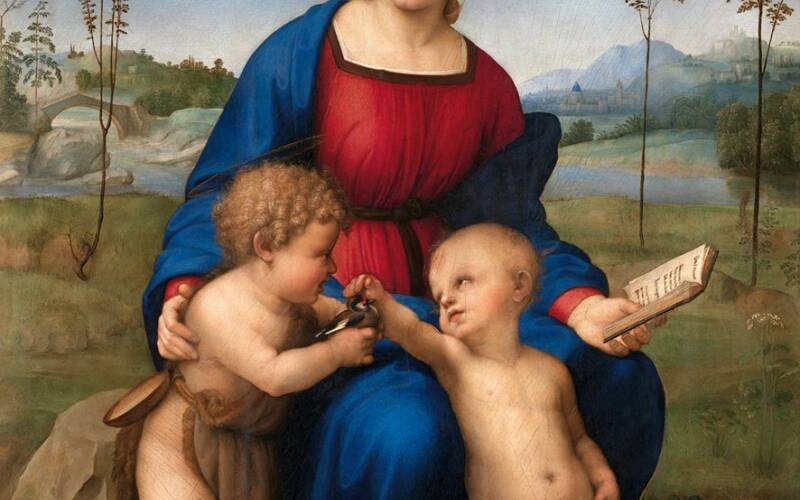 If you have decided to spend your holiday in the green heart of Italy, Umbria, in a luxury villa, you cannot miss visiting the beautiful medieval city of Perugia. The church of the monastery of San Severo is today a museum dedicated to Raffaello and Perugino. Located in the historic center of the city, you can admire the fresco of the Trinity and Saints. Raffaello was called to Perugia in 1505 to work on the chapel of San Severo, afterwards completed by Perugino. Here he painted the upper frescoes with the Trinity, the Benedictine saints. The work stands out for its monumentality and three-dimensional effects, with the gaze that converges on Christ. 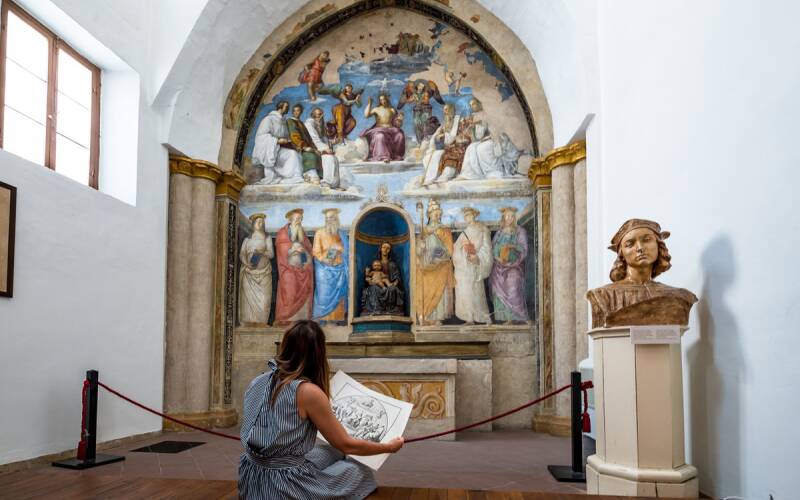 The Vatican museums in Rome exhibit what is probably the best known of Raffaello’ s works, The School of Athens. It is a fresco made between 1509 and 1511. This work celebrates the classical wisdom: at the center of an ideal perspective fulcrum Aristotle and Plato are depicted talking with other famous philosophers and mathematicians of antiquity, such as Euclid, Pythagoras, Epicurus and Socrates. 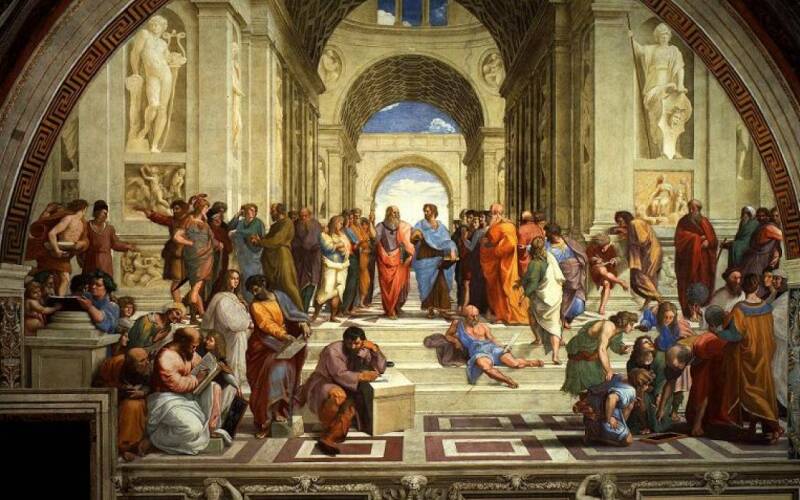