5 towns for a long weekend in Italy - part 1

share
Nov 1220215 towns for a long weekend in Italy - part 1 Drawing up a list of Italian cities, villages and towns that deserve to be visited would be too long to do. Today, we introduce you to 5 cities to visit at any time of the year Tags: family, food, tourism, tours, travel, discovery, art, events, design, traditions, luxury, extraordinary, experience

Drawing up a list of Italian cities, villages and towns that deserve to be visited would be too long to do. Today, we introduce you to 5 cities to visit at any time of the year.
The artistic, cultural and gastronomic heritage of Italy is truly immense and allows us to designate numerous interesting destinations where you can spend a wonderful weekend, with family, friends or a special person.

Como
A city brought to the fore in recent years for the presence of numerous Hollywood stars who have fallen in love with the beauty of its lake, Como is a truly unmissable pearl of Northern Italy.
What to see: the Silk Museum to learn all about the textile tradition of the industrious Lombard town. To admire also the Duomo, the Palazzo Broletto, the seat of the municipality, the Baradello Castle and the splendid Villa Olmo.
From Como you can move to the lake and spend a 2- or 3-day weekend among the coastal villages and the monumental villas: Tremezzina with its Balbianello villa, Tremezzo with Villa Carlotta, Bellagio, the Pearl of the Lake, and Menaggio, with its lakefront full of flower gardens and palm trees. And again, for the most romantic, Varenna, with the footbridge suspended over the lake known as "the walk of love".
To move from one village to another, you can also use the suggestive and romantic boats. As a base city, we recommend Como, Menaggio or Lecco. 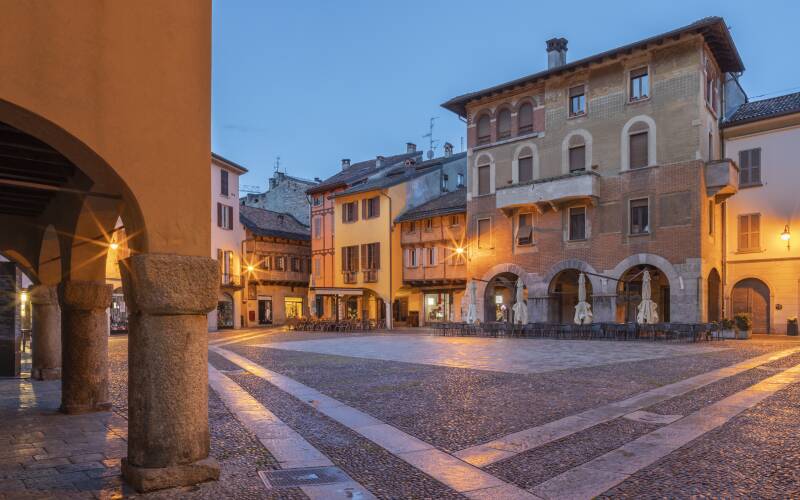 Perugia
At Piazza IV Novembre you can find Fontana Maggiore, the Cathedral of San Lorenzo, Palazzo dei Priori.
Passing through the medieval Via Maestà delle Volte and going down the aqueduct, in addition to enjoying a spectacular view, you reach the Etruscan Arch. A stop to some local restaurant, perhaps hidden ones, is not to be missed to taste the fabulous Umbrian cuisine.
What to see: National Gallery, Corso Vannucci, Palazzo dei Priori, Fontana Maggiore, Rocca Paolina, Cathedral of San Lorenzo, Piazza IV Novembre,
The important Umbria Jazz Festival is held in July and December, while Eurochocolate is organized in October. Here some amazing luxury villas near Perugia. 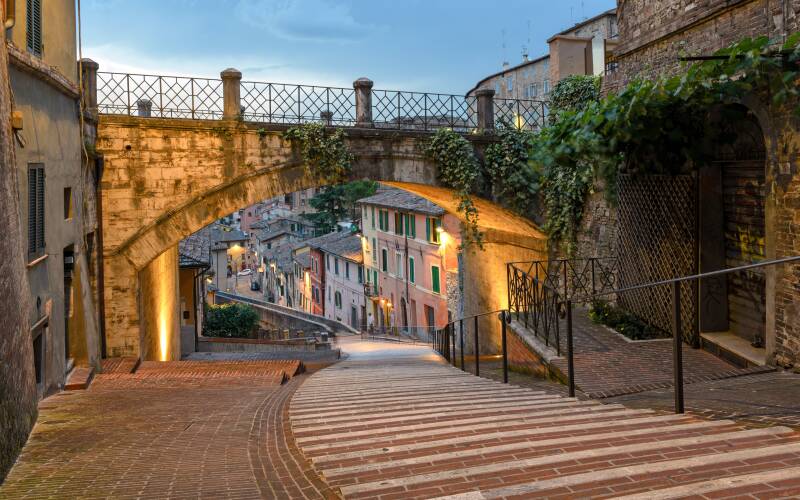 Lucca
Lucca is one of the richest in history and charm Italian cities. It is famous for its ancient walls, still perfectly preserved, which completely surround the historic center. It is composed of numerous streets, mostly pedestrian, which allow you to immerse yourself in a medieval setting. Beautiful is the Duomo, Piazza Anfiteatro, oval in shape, with numerous buildings overlooking it.
What to see: Cathedral of San Martino, Guinigi Tower, Basilica of San Freviano, Piazza dell'Anfiteatro, Church of San Michele in Foro, Muse of Lucca, Palazzo Pfanner. Have a look at these wonderful vacation villas near Lucca. 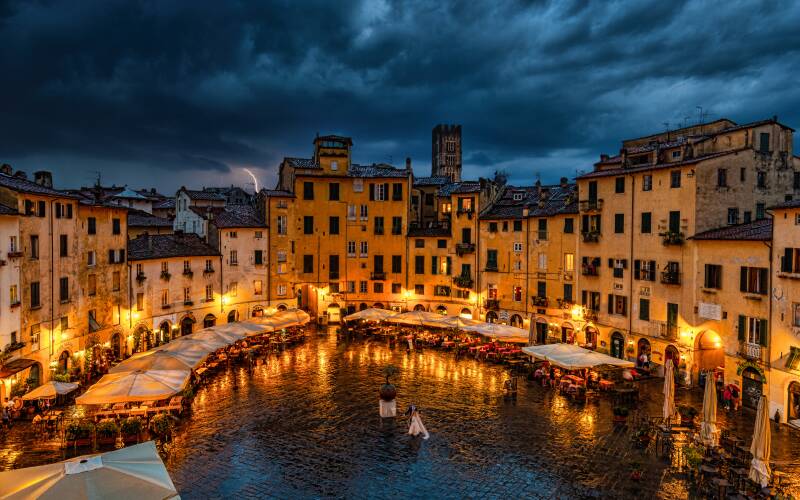 Pisa
Tuscany boasts numerous cities of art, and Pisa is one of the most important. The monumental, artistic and historical heritage of Pisa is due to the fact that, during the Middle Ages, it was one of the four great maritime republics. The most famous attraction is undoubtedly the Leaning Tower, or the Bell Tower of the Cathedral of Santa Maria Assunta. Piazza dei Miracoli, named after Gabriele D'Annunzio, is a Unesco heritage site and includes, in addition to the Tower and the Cathedral, the Baptistery of San Giovanni and the Camposanto Monumentale. At Piazza dei Cavalieri there are historic buildings such as Palazzo dell'Orologio, built where once there was the Torre di Muda, Palazzo dei Cavalieri and the church of Santo Stefano dei Cavalieri.
What to see: Duomo and Leaning Tower in Piazza dei Miracoli, Monumental Cemetery, Baptistery of San Giovanni, Piazza dei Cavalieri, Church of Santa Maria della Spina, Museum of Sinopias, Migliarino San Rossore Massaciuccoli Natural Park.
Pisa, once every four years, hosts the Regatta of the Ancient Maritime Republics, between the end of May and the beginning of July. Also in summer, other important historical re-enactments are held such as the Game of the Bridge and the Historical Regatta of the Palio di San Ranieri, both in June. Find the perfect villa for your luxury vacation near Pisa. 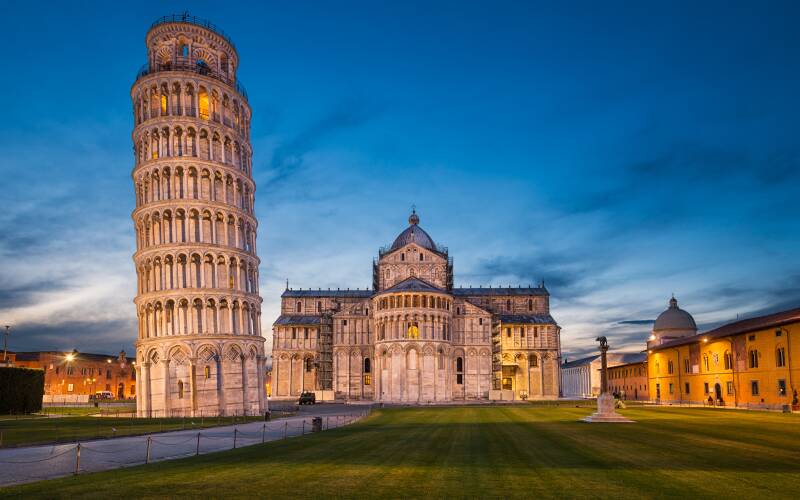 Matera
Matera is famous for being one of the oldest cities in the world and above all for the well-known "sassi" which occupy the eastern part of the city: tunnels, small squares, streets and stairways rise above a rocky outcrop.
But what are these famous “sassi”? They are districts consisting of houses/caves obtained from excavations in the tuff, located close to a deep gorge, the Gravina.
The particular position has preserved them, over the centuries, from the sieges of the enemies. La Civita, the heart of the old town, houses the bell tower of the Cathedral, which stands 50 meters high. Also to be discovered the typical cuisine, poor but tasty.
What to see: Sassi di Matera, Cathedral, Church of Santa Maria di Idris, Park of Murgia Materana, Museum of Contemporary Sculpture MUSMA, Church of Saints Peter and Paul. 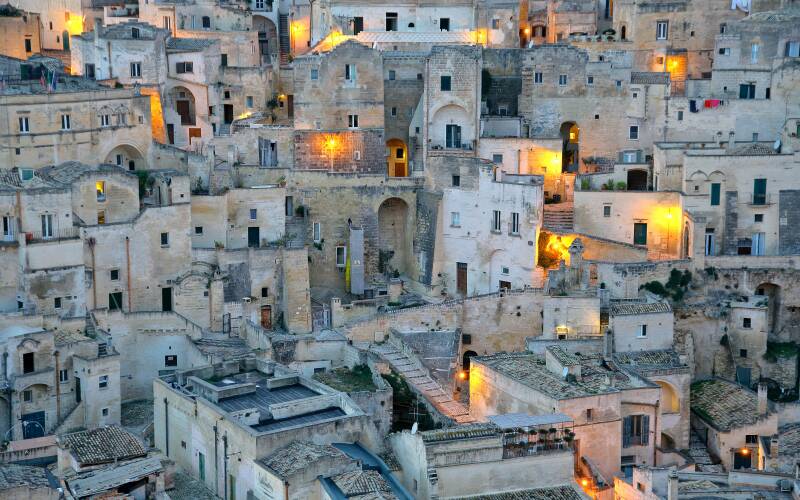