Campo Imperatore, the extended plateau, also called “Piccolo Tibet” (small Tibet), offers landscapes to see, listen and observe.
This place has glacial and karst-alluvial origins and it’s one of the most extended plateaux in Italy, located in the heart of the monumental Gran Sasso, in the Parco Nazionale del Gran Sasso in Abruzzo region (National Park).
The place presents very poor vegetation because of the high altitude and the deforesting process during the past centuries made in order to help the pasture growth. It’s a perfect place for herds to graze and find relief during hot days in summer and for tourists coming from the coast. The plateau presents distinctive small and circular lakes with a modest depth or with meteorite origin.
Motorcyclists, cyclists and tourists choose this destination during their trips in Gran Sasso, in order to take refreshments and enjoy a heartbreaking view thanks to the proper areas equipped with tables and barbecue.
The plateau is accessible during the entire year thanks to the Gran Sasso cable car which allows you to reach the Hotel in Campo Imperatore and the ski slopes. During winter, because of the snow, it’s not possible to go by car.
The plateau is also known as the last place where Benito Mussolini was prisoned in 1943 before German soldiers released him. His room in the hotel in Campo Imperatore maintains the original furniture perfectly conserved. Today it’s a real museum visited by curious and nostalgic tourists but it’s also a working hotel.
It’s a destination for astronomy lovers, thanks to the Astronomical Observatory, which is equipped with a high-performance telescope, owned by the Istituto Nazionale di Astrofisica (the National Institute for Astrophysics).
It’s also recommended an exhaustive visit to the Giardino Botanico Alpino (the alpine botanic garden): a small natural treasure created to cultivate and study botanic plants in order to preserve the vegetal biodiversity in this mountainous fairy-tale place.
The beautiful landscapes and the little traffic are perfect for motorcyclists who want to organize a motor meeting. The entire plateau and the neighboring places such as Assergi, Calascio, Castel del Monte e Santo Stefano di Sessanio are suitable for cycling tourism with several hiking paths crossable by bike. For horse-riding, there are more than one place but the most famous is Ippovia del Gran Sasso.
The entire plateau offers perfect landscapes for movies and commercials especially Rocca Calascio, the medieval fortress situated in the Calascio area at 1460 meters of altitude, known for its castle, one of the highest in Italy.
Remarkable movies were shot such as Ladyhawke (USA, 1985), The Name of the Rose based on the novel by Umberto Eco (Italia, 1986), who won several international awards. The fortress has been used also in some scenes of the movie The American (USA, 2010) with George Clooney.

Get in touch with Home in Italy team to start planning your perfect holiday retreat in one of our carefully and personally selected luxury villas. 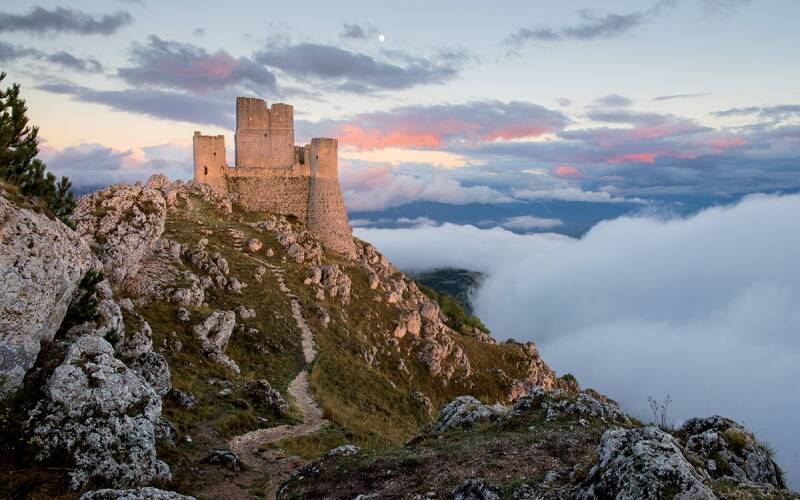