Five hidden treasures of the Amalfi Coast not to be missed

share
Jun 112021Five hidden treasures of the Amalfi Coast not to be missed The Amalfi Coast is the stretched coastline of Campania, located south of the Sorrento Peninsula, overlooking the Gulf of Salerno; it is bordered to the west from Positano to the east from Vietri sul Mare. Tags: tourism, tours, travel, luxury, off the beaten track, experience, landscape

The Amalfi Coast is the stretched coastline of Campania, located south of the Sorrento Peninsula, overlooking the Gulf of Salerno; it is bordered to the west from Positano to the east from Vietri sul Mare. It is a stretch of coastline famous worldwide for its natural beauty, home to major tourist sites. Considered a World Heritage by UNESCO named after the town of Amalfi, the central nucleus of the coast, not only geographically but also historically. The Amalfi Coast is known for its diversity: each of the places of the coast has its own character and its traditions. But here are some less known places for tourists, yet very interesting, places connected to the history and tradition of the local people.

Pogerola of Amalfi
This characteristic village renowned for its tranquility, during the Middle Ages was known under the name of Castrum Pigellula. It was a real defensive castle which, together with Castrum Scalelle and a mighty wall, surrounded the town of Amalfi defending from enemy attacks. From the top of the hill, you can admire the enchanting scenery of the Gulf of Salerno, from the Amalfi Coast up to the islands of Li Galli and further down, the villages of Lone and Pastena. Worth visiting the sixteenth-century church of Madonna delle Grazie, in the main square, the church of San Michele of XII century and the church of Santa Maria Vergine of the twelfth century, with a nice porch covered with vaults.

Valle delle Ferriere
The setting of the reserve is very picturesque, full of waterfalls that create ideal conditions for the proliferation of very rich flora and fauna. Here can you easily see the Woodwardia radicans, an endemic species of fern, and with a little bit of luck, one can encounter small and rare amphibians such as the newt Apennine. Going down towards Amalfi, the trial runs along with some old abandoned paper mills that now prelude to the visit of a paper mill restored in the center. For its abundance of water, this valley has hosted in the past some mills and ironworks. The metal came from Elba, landed at Amalfi and was transported by mule along the valley to the ironworks, where the work was done. The energy was supplied by the water and the heat needed to melt was obtained by burning wood, available in abundance. 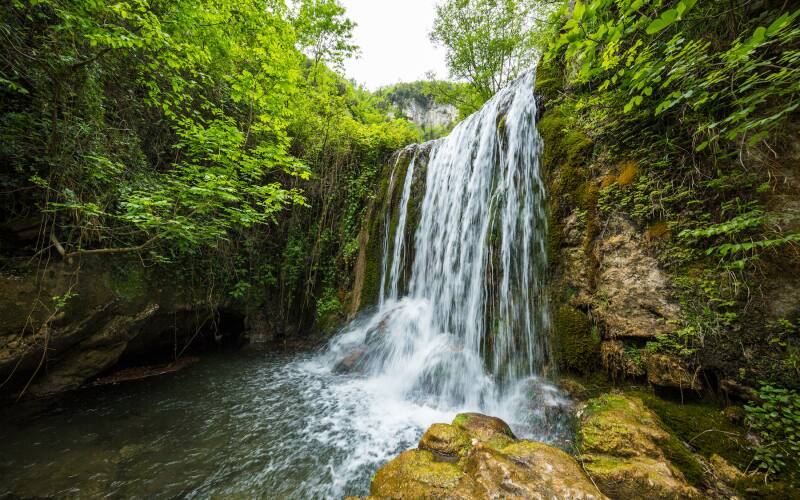 Fjord of Furore, Amalfi
Created by the incessant work of a creek that runs down the mountain into the sea, and hosted by a friendly and tiny fishing village, the fjord is also bypassed by the highway with a suspended 30 meters high bridge, from where, every summer, the World Great Heights Diving Championships take place.
A platform mounted at 28 meters heights, in front of the cliff overlooking the sea. It is the diving competition from great heights from the Fjord of Furore. A competition of great tradition and charm in a breathtaking setting in the small village of the Amalfi Coast, where hundreds of people watch the race from the ground but also from the boats anchored away from the shore of the Fjord in order to avoid the athletes to reach during their dive speed of 100 km/hour. 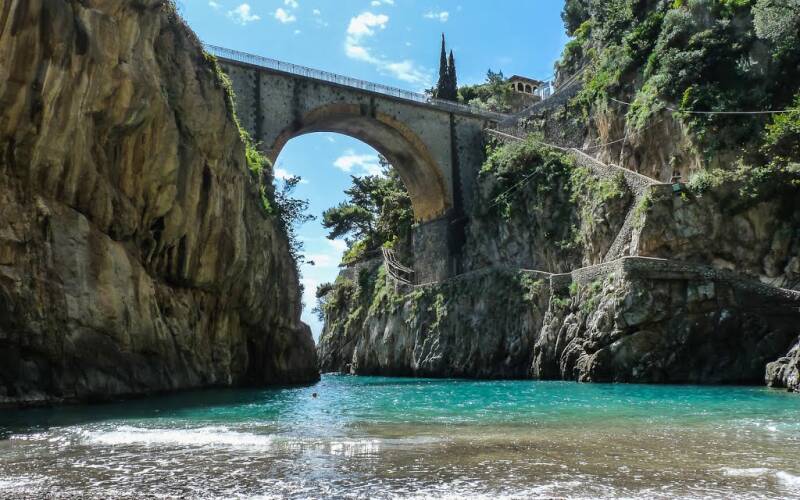 Cloister of Paradise, Amalfi
The cloister, which is accessed from the left side of the atrium of the Cathedral (the portal with carved doorposts was once the entrance to the church-chapel of the Crucifix), was built in 1266-68 by the archbishop Filippo Augustariccio, used as a cemetery for distinguished citizens, as a peristyle of double columns that support highly acute and intersecting arches. Abandoned at the beginning of the century XVII and restored in 1908, it offers some frescoed chapels built during the period when the site housed the remains of the nobles.

Cathedral of Amalfi
The Cathedral of Amalfi is located at the top of a monumental staircase and dominates the main square of the small villages. The present façade with its porch is the work of the eighteenth-century reconstruction. The tower bell dates back from the second half of the twelfth century; between this and the new façade you notice the pediment of the primitive cathedral of Amalfi, known as the Crucifix Chapel, dating from the tenth century. The body of the tower has typical characteristics of many buildings in Campania.
The top instead dates back to 1276 and consists of a central cylindrical core surrounded by four corner turrets. The reason why it seems to have a Calabrian-Byzantine origin is that this was often used in some towers of Campania, such as those of Salerno and Caserta.
The construction of the new cathedral which is parallel to the one of the tenth century started in the mid-eleventh century.
In 1208 the Cardinal Capuano brought from Constantinople to Amalfi the remains of St. Andrew, who were placed into the crypt. During the following decades, several works of embellishment and enlargement of the church were done, but the church however kept its original structure.
Under the porch, you can still find the preserved original portal with its original Byzantine bronze door, there since 1065. The interior is in Baroque style although the original structure of the church is still recognizable. Dating back to the thirteenth century are the mighty Egyptian granite columns that support the triumphal arch. North of the church of the Crucifix, the cloister of Paradise extends, built between 1266 and 1268, as a cemetery for the burial of the famous people of the city.

If you are planning to visit these wonderful sites, have a look at our luxury rental villas in the Amalfi Coast. 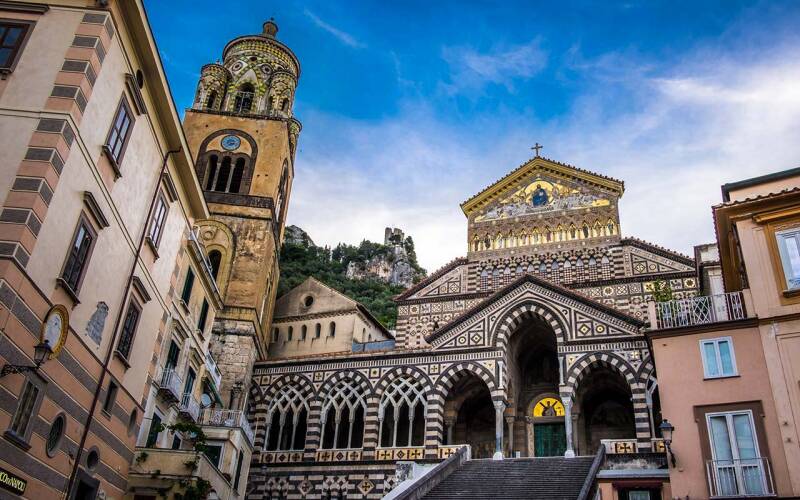 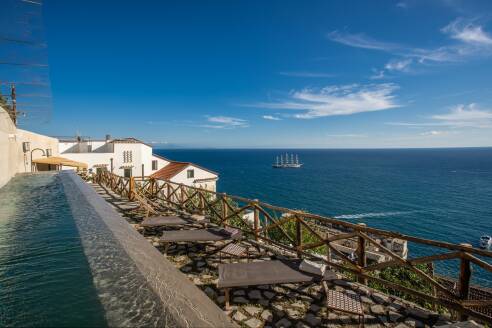 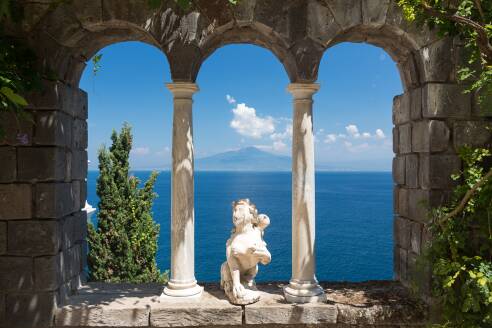 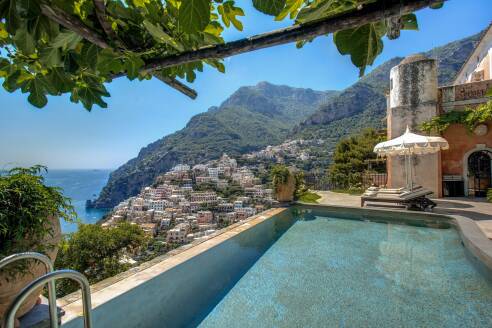 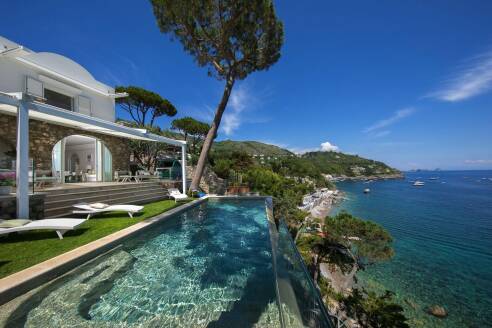 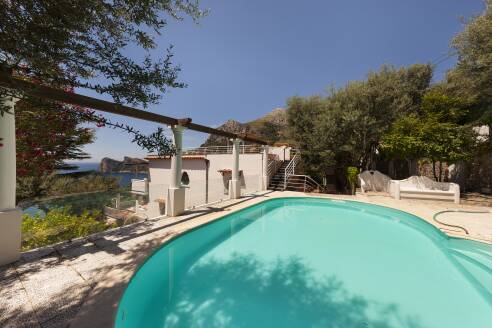 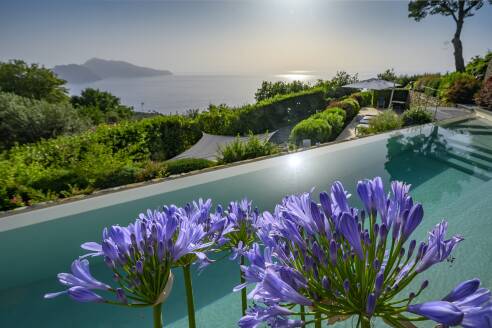 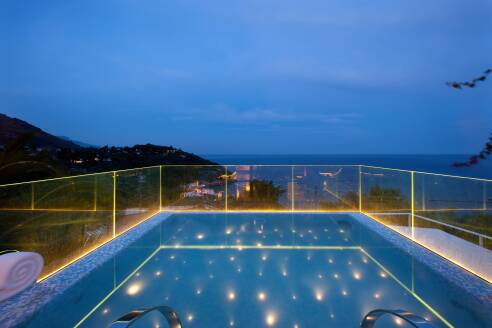 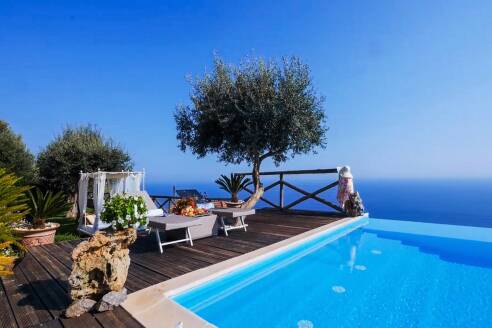